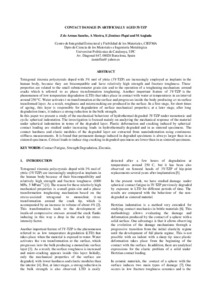 Document typeArticle
Rights accessOpen Access
Abstract
Tetragonal zirconia polycrystals doped with 3% mol of yttria (3Y - TZP) are increasingly employed as implants in the human body, because they are biocompatible and have relatively high strength and fracture toughness. These properties are related to the small submicrometer grain size and to the operation of a toughening mechanism around cracks which is referred to as phase tra nsformation toughening. Another important feature of 3Y - TZP is the phenomenon of low temperature degradation (LTD) that takes place in contact with water at temperatures in an interval around 250 ºC. Water activates t - m transformation at the surface and pr ogresses inside the body producing a t - m surface transformed layer. As a result, roughness and microcracking are produced in the surface. In a first stage, for short times of ageing , this layer is responsible for degradation of surface mechanical propertie s; at a later stage, after long degradation times, it induces a strong reduction in the bulk strength. In this paper we present a study of the mechanical behaviour of hydrothermal degraded 3Y - TZP under monotonic and cyclic spherical indentation. The inves tigation is focused mainly on analyzing the mechanical response of the material under spherical indentation in terms of the degraded layer. Plastic deformation and cracking induced by spherical contact loading are studied under increasing loads in hydrothe rmally degraded and in as sintered specimens. The contact hardness and elastic modulus of the degraded layer are extracted from nanoindentation using continuous stiffness measurements. It is found that permanent damage induced in degraded specimens is alwa ys larger than in as sintered specimens. Critical loads to induce ring cracking in degraded specimens are lower than in as sintered specimens
CitationDe Armas, Z. [et al.]. Contact damage in artificially aged 3Y-TZP. "Anales de mecánica de la fractura", 2010, vol. 27, núm. 2, p. 517-522.
URIhttp://hdl.handle.net/2117/20912
ISSN0213-3725
Publisher versionhttp://www.gef.es/Congresos/27/pdf/100.pdf
Collections
Share: