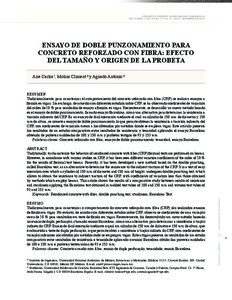 Document typeArticle
Rights accessOpen Access
Abstract
Traditionally, to characterize the behavior of reinforced concrete with fiber (CRF) flexural tests are performed on beams. However, in accordance with various studies on FRC, it has been seen different variation coefficients of the order of 20 % for the results of flexural test beams. Recently, it has been developed a new method based on the double punching, called Barcelona test, as an alternative to determine the resistance to the indirect traction of the FRC. It is a test of easy execution over which a cylinder of 150 mm of diameter and 150 mm of height, undergoes double punching test, which allows to obtain the resistance to indirect tension of the FRC, with coefficients of variation less than those obtained by methods which employ beams. This article shows the results of a comparative study between results of resistance and toughness applying the Barcelona test obtained in molded test cylinders of 100 and 150 mm and cores of 93 and 153 mm.
CitationAire, C.; Molins, C.; Aguado, A. Ensayo de doble punzonamiento para concreto reforzado con fibra: efecto del tamaño y origen de la probeta. "Concreto y cemento: investigación y desarrollo", 2013, vol. 5, núm. 1, p. 17-31.
URIhttp://hdl.handle.net/2117/20875
ISSN2007-3011
Publisher versionhttp://www.imcyc.com/ccid/pdf/jul-dic13_2.pdf
Collections
Share: