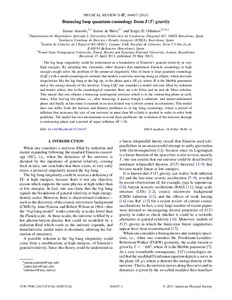 Odintsov, Sergei D.
Document typeArticle
Rights accessOpen Access
Abstract
The big bang singularity could be understood as a breakdown of Einstein’s general relativity at very high energies. By adopting this viewpoint, other theories that implement Einstein cosmology at high energies might solve the problem of the primeval singularity. One of them is loop quantum cosmology (LQC) with a small cosmological constant that models a universe moving along an ellipse, which prevents singularities like the big bang or the big rip, in the phase space ð H; Þ , where H is the Hubble parameter and the energy density of the universe. Using LQC one considers a model universe filled by radiation and matter where, due to the cosmological constant, there are a de Sitter and an anti–de Sitter solution. This means that one obtains a bouncing nonsingular universe which is in the contracting phase at early times. After leaving this phase, i.e., after bouncing, it passes trough a radiation- and matter-dominated phase and finally at late times it expands in an accelerated way (current cosmic acceleration). This model does not suffer from the horizon and flatness problems as in big bang cosmology, where a period of inflation that increases the size of our universe in more than 60 e-folds is needed in order to solve both problems. The model has two mechanisms to avoid these problems: the evolution of the universe through a contracting phase and a period of super inflation ( _ H> 0 )
CitationAmoros, J.; Haro, J.; Odintsov, S. Bouncing loop quantum cosmology from F(T) gravity. "Physical review D", Maig 2013, vol. 87, núm. 10, p. 104037-1-104037-10.
URIhttp://hdl.handle.net/2117/20717
DOI10.1103/PhysRevD.87.104037
ISSN0556-2821
Collections
Share: