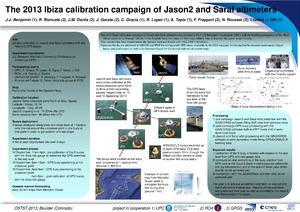 Frappart, Frédéric
Roussel, Nicolas
Document typeConference lecture
Rights accessOpen Access
Abstract
A Baleares calibration campaign in Spanish-French cooperation is being prepared for mid September 2013 for the altimeters of Jason-2 and Saral/AltiKa in the Ibiza island area. A similar Spanish/French experience with Jason-1 was made in June 2003 in this geographical area under IBIZA 2003 campaign. In this local/regional campaign focusing in bias, we foresee to calibrate the altimeter of Jason-2 and Saral satellites by means of GPS buoys. 4 buoys will be used near a node from Jason-2 (September 15 about 9:38 in ascending track) and Saral (September 15 about 7:30 in ascending track) satellites to get the slope of the sea in along track and cross track directions, what is necessary to interpolate the exact nadir point of the satellite. It will be used Argos floating transmitters from CLS to be tied to the buoys with a long rope. We have thought over different configurations. The crossover point between Jason-2 and Saral North of Ibiza (around 40 nm) and West of Mallorca island seems to be optimal in order to have a comparable layout of buoys at the same place for both satellites, of couse at one day interval. This would allow moreover cross calibration between Jason2 and Saral. The GPS receivers will be at 1Hz. It will be used the CGPS at Ibiza harbour from Puertos del Estado. A description of the actual geodetic infrastructure of Ibiza site will be presented. This campaign Baleares 2013 is founded from the Ministerio de Ciencia e Innovacion of Spain under National Project I+D+i ref:CGL2009-13435/CLI.
Location
1
CitationMartinez, J.J. [et al.]. Baleares 2013 Calibration Campaign for Jason-2 and Saral/AltiKa. A: Ocean Surface Topography Science Team Meeting. "2013 Ocean Surface Topography Science Team Meeting: Boulder, CO 7-11 October 2013: book of abstracts". Boulder (Colorado): 2013, p. 1.
URIhttp://hdl.handle.net/2117/20489
Collections
Share: