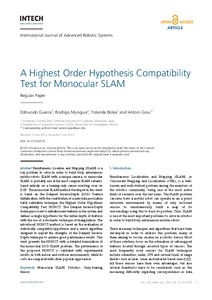 Except where otherwise noted, content on this work is licensed under a Creative Commons license : Attribution-NonCommercial-NoDerivs 3.0 Spain
Abstract
Simultaneous Location and Mapping (SLAM) is a key problem to solve in order to build truly autonomous mobile robots. SLAM with a unique camera, or monocular SLAM, is probably one of the most complex SLAM variants, based entirely on a bearing-only sensor working over six DOF. The monocular SLAM method developed in this work is based on the Delayed Inverse-Depth (DI-D) Feature Initialization, with the contribution of a new data association batch validation technique, the Highest Order Hypothesis Compatibility Test, HOHCT. The Delayed Inverse-Depth technique is used to initialize new features in the system and defines a single hypothesis for the initial depth of features with the use of a stochastic technique of triangulation. The introduced HOHCT method is based on the evaluation of statistically compatible hypotheses and a search algorithm designed to exploit the strengths of the Delayed Inverse-Depth technique to achieve good performance results. This work presents the HOHCT with a detailed formulation of the monocular DI-D SLAM problem. The performance of the proposed HOHCT is validated with experimental results, in both in door and outdoor environments, while its costs are compared with other popular approaches.
CitationGuerra, E. [et al.]. A Highest order hypothesis compatibility test for monocular SLAM. "International journal of advanced robotic systems", Agost 2013, vol. 10, núm. 311, p. 1-11.
URIhttp://hdl.handle.net/2117/20473
DOI10.5772/56737
ISSN1729-8806
Publisher versionhttp://cdn.intechopen.com/pdfs/45567/InTech-A_highest_order_hypothesis_compatibility_test_for_monocular_slam.pdf
Collections
Share: