Towards an accurate bioimpedance identification 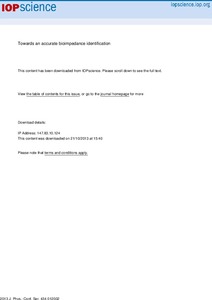 Except where otherwise noted, content on this work is licensed under a Creative Commons license : Attribution-NonCommercial-NoDerivs 3.0 Spain
Abstract
This paper describes the local polynomial method (LPM) for estimating the time- invariant bioimpedance frequency response function (FRF) considering both the output-error (OE) and the errors-in-variables (EIV) identi cation framework and compare it with the traditional cross􀀀 and autocorrelation spectral analysis techniques. The bioimpedance FRF is measured with the multisine electrical impedance spectroscopy (EIS) technique. To show the overwhelming accuracy of the LPM approach, both the LPM and the classical cross􀀀 and autocorrelation spectral analysis technique are evaluated through the same experimental data coming from a nonsteady-state measurement of time-varying in vivo myocardial tissue. The estimated error sources at the measurement frequencies due to noise, n Z, and the stochastic nonlinear distortions, NL Z , have been converted to and plotted over the bioimpedance spectrum for each framework. Ultimately, the impedance spectra have been tted to a Cole impedance model using both an unweighted and a weighted complex nonlinear least square (CNLS) algorithm. A table is provided with the relative standard errors on the estimated parameters to reveal the importance of which system identi cation frameworks should be used.
CitationSánchez, B. [et al.]. Towards an accurate bioimpedance identification. A: International Conference on Electrical Bio-impedance. "Journal of Physics: Conference Series". Heiligenstadt: IOPScience, 2013, p. 1-4.
URIhttp://hdl.handle.net/2117/20430
DOI10.1088/1742-6596/434/1/012002
Collections
Share: