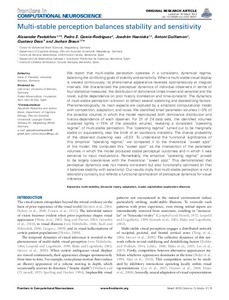 Deco, Gustavo
Braun, Jochen
Document typeArticle
Rights accessOpen Access
European Commission's projectCORONET - Choreographing neural networks: coupling attractor dynamics and state-dependent computations across biomimetic brain interfaces with neuromorphic VLSI (EC-FP7-269459)
Abstract
We report that multi-stable perception operates in a consistent, dynamical regime, balancing the conflicting goals of stability and sensitivity. When a multi-stable visual display is viewed continuously, its phenomenal appearance reverses spontaneously at irregular intervals. We characterized the perceptual dynamics of individual observers in terms of four statistical measures: the distribution of dominance times (mean and variance) and the novel, subtle dependence on prior history (correlation and time-constant). The dynamics of multi-stable perception is known to reflect several stabilizing and destabilizing factors. Phenomenologically, its main aspects are captured by a simplistic computational model with competition, adaptation, and noise. We identified small parameter volumes (~3% of the possible volume) in which the model reproduced both dominance distribution and history-dependence of each observer. For 21 of 24 data sets, the identified volumes clustered tightly (~15% of the possible volume), revealing a consistent "operating regime" of multi-stable perception. The "operating regime" turned out to be marginally stable or, equivalently, near the brink of an oscillatory instability. The chance probability of the observed clustering was <0.02. To understand the functional significance of this empirical "operating regime," we compared it to the theoretical "sweet spot" of the model. We computed this "sweet spot" as the intersection of the parameter volumes in which the model produced stable perceptual outcomes and in which it was sensitive to input modulations. Remarkably, the empirical "operating regime" proved to be largely coextensive with the theoretical "sweet spot." This demonstrated that perceptual dynamics was not merely consistent but also functionally optimized (in that it balances stability with sensitivity). Our results imply that multi-stable perception is not a laboratory curiosity, but reflects a functional optimization of perceptual dynamics for visual inference.
CitationPastukhov, A. [et al.]. Multi-stable perception balances stability and sensitivity. "Frontiers in Computational Neuroscience", 2013, vol. 7, núm. March, p. 1-18.
URIhttp://hdl.handle.net/2117/20426
DOI10.3389/fncom.2013.00017
ISSN1662-5188
Collections
Share: