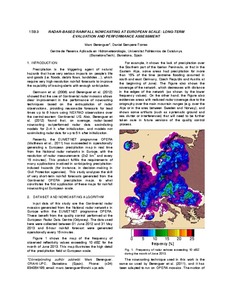 Document typeConference report
Rights accessOpen Access
All rights reserved. This work is protected by the corresponding intellectual and industrial property rights. Without prejudice to any existing legal exemptions, reproduction, distribution, public communication or transformation of this work are prohibited without permission of the copyright holder
Abstract
This work studies the performance of CRAHI's algorithm for rainfall nowcasting at European scale using the mosaics produced within the EUMETNET project OPERA (with a resolution of 4 km and 15 minutes) in the framework of the European Civil Protection research project HAREN (www.haren-project.eu). Systematic evaluation has been carried out since June 2012, focusing on the space-time variability of the nowcasting skills, and its dependence on the scale of the forecasted precipitation systems and on rainfall intensities. Also, the probabilistic nowcasting technique SBMcast (Berenguer et al. 2011) has been adapted to the use of OPERA mosaics at European scale to assess the uncertainty in the produced nowcasts. The performance of this probabilistic technique has been evaluated over a number of cases. Finally, the work analyzes the usefulness of these nowcasts for hazard assessment at European scale, based on exceeding the regional rainfall thresholds used by the EUMETNET project METEOALARM.
CitationBerenguer, M.; Sempere, D. Radar-based rainfall nowcasting at European scale: long-term evaluation and performance assessment. A: Conference on Radar Meteorology. "36th Conference on Radar Meteorology". Breckenridge: 2013, p. 15B.3-1-15B.3-7.
URIhttp://hdl.handle.net/2117/20372
Publisher versionhttps://ams.confex.com/ams/36Radar/webprogram/Paper228931.html
Collections
Share: