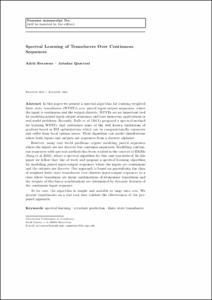 Document typeResearch report
Rights accessOpen Access
All rights reserved. This work is protected by the corresponding intellectual and industrial property rights. Without prejudice to any existing legal exemptions, reproduction, distribution, public communication or transformation of this work are prohibited without permission of the copyright holder
Abstract
In this paper we present a spectral algorithm for learning weighted nite state transducers (WFSTs) over paired input-output sequences, where the input is continuous and the output discrete. WFSTs are an important tool for modeling paired input-output sequences and have numerous applications in real-world problems. Recently, Balle et al (2011) proposed a spectral method for learning WFSTs that overcomes some of the well known limitations of gradient-based or EM optimizations which can be computationally expensive and su er from local optima issues. Their algorithm can model distributions where both inputs and outputs are sequences from a discrete alphabet. However, many real world problems require modeling paired sequences where the inputs are not discrete but continuos sequences. Modelling continuous sequences with spectral methods has been studied in the context of HMMs (Song et al 2010), where a spectral algorithm for this case was derived. In this paper we follow that line of work and propose a spectral learning algorithm for modelling paired input-output sequences where the inputs are continuous and the outputs are discrete. Our approach is based on generalizing the class of weighted nite state transducers over discrete input-output sequences to a class where transitions are linear combinations of elementary transitions and the weights of this linear combinations are determined by dynamic features of the continuous input sequence. At its core, the algorithm is simple and scalable to large data sets. We present experiments on a real task that validate the eff ectiveness of the proposed approach.
CitationRecasens, A.; Quattoni, A.J. "Spectral learning of transducers over continuous sequences". 2013.
Is part ofTLSI-12-17-R
URIhttp://hdl.handle.net/2117/20362
Collections
Share: