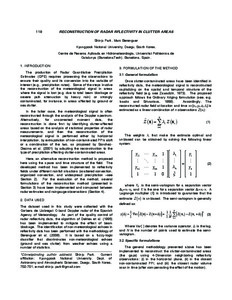 Document typeConference lecture
Rights accessOpen Access
Abstract
The production of Radar Quantitative Precipitation Estimates (QPE) requires processing the observations to ensure their quality and its conversion into the variable of interest (e.g., precipitation rates). Some of the steps involve the reconstruction of the meteorological signal in areas where the signal is lost (e.g. due to total beam blockage or severe path attenuation by heavy rain) or strongly contaminated, for instance, in areas affected by ground or sea clutter. In the latter case, the meteorological signal is often reconstructed through the analysis of the Doppler spectrum. Alternatively, for uncorrected moment data, the reconstruction is done first by identifying clutter-affected areas based on the analysis of statistical properties of radar measurements, and then the reconstruction of the meteorological signal is performed either by horizontal interpolation, by extrapolation of non-contaminated PPIs aloft or a combination of the two, as proposed by Sánchez-Diezma et al. (2001) by adapting the reconstruction to the type of precipitation affecting clutter-contaminated areas. Here, an alternative reconstruction method is proposed here using the space and time structure of the field. The developed method has been implemented to reflectivity fields under different rainfall situations (scattered convection, organized convection, and widespread precipitation –see Section 2). For the evaluation of the method, several formulations of the reconstruction method (presented in Section 3) have been implemented and compared between radar estimates and raingauge observations (Section 4).
CitationPark, S.; Berenguer, M. Reconstruction of radar reflectivity in clutter areas. A: Conference on Radar Meteorology. "36th Conference on Radar Meteorology". Breckenridge: 2013, p. 118-1-118-5.
URIhttp://hdl.handle.net/2117/20346
Publisher versionhttps://ams.confex.com/ams/36Radar/webprogram/Manuscript/Paper228935/extended_park.pdf
Collections
Share: