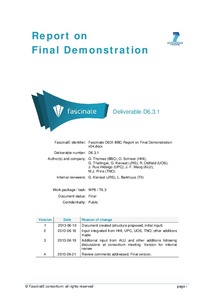 Macq, Jean François
Prins, M.J.
Document typeExternal research report
Rights accessOpen Access
Abstract
The objective of WP6 in the FascinatE project is to organise a series of convincing demonstrations that raise awareness of the project in the broadcast and media industry, as well as providing focal points for the technical work of the project. This document reports on the third and final public demonstration of FascinatE technology, held at MediaCity UK, at the premises of the University of Salford. The centrepiece of the demonstration was the use of the end-to-end FascinatE chain being used to capture, deliver and display a live music and dance performance staged in the University’s Digital Performance Lab. The performance ran three times during the day, with each show being preced ed by a 30-minute presentation to introduce the project and explain the various aspects of the technol ogy that were about to be demonstrated. This was accompanied by a set of stand-alone demonstrations that ran throughout the day, giving more in-depth insights into various results from the project. The event also resulted in several press publications, which are also listed in this deliverable. During the demonstrations, audio and video data were captured to support the evaluation tasks during the remainder of the project, and for use for research beyond the end of the project.
CitationThomas, G. [et al.]. "Report on final demonstration. Fascinate deliverable D6.3.1". 2013.
URIhttp://hdl.handle.net/2117/20309
URL other repositoryhttp://ec.europa.eu/information_society/apps/projects/logos/8/248138/080/deliverables/001_D631ReportonFinalDemonstration.pdf
Collections
Share: