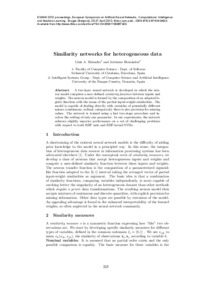 Hernández González, Jerónimo
Document typeConference report
PublisherI6doc.com
Rights accessOpen Access
Abstract
A two-layer neural network is developed in which the neuron model computes a user-deﬁned similarity function between inputs and weights. The neuron model is formed by the composition of an adapted logistic function with the mean of the partial input-weight similarities. The model is capable of dealing directly with variables of potentially diﬀerent nature (continuous, ordinal, categorical); there is also provision for missing values. The network is trained using a fast two-stage procedure and involves the setting of only one parameter. In our experiments, the network achieves slightly superior performance on a set of challenging problems with respect to both RBF nets and RBF-kernel SVMs.
CitationBelanche, Ll.; Hernández, J. Similarity networks for heterogeneous data. A: European Symposium on Artificial Neural Networks, Computational Intelligence and Machine Learning. "ESANN 2012: the 20th European Symposium on Artificial Neural Networks, Computational Intelligence and Machine Learning, Bruges, Belgium from 25 to 27 April 2012: proceedings". I6doc.com, 2012, p. 215-220.
URIhttp://hdl.handle.net/2117/20271
ISBN978-2-87419-049-0
Publisher versionhttp://www.elen.ucl.ac.be/esann/proceedings/papers.php?ann=2012
Collections
Share: