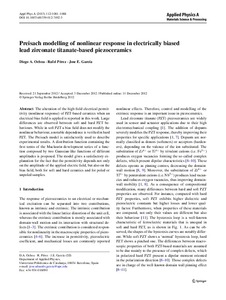 Document typeArticle
Rights accessOpen Access
Abstract
The alteration of the high-field electrical permittivity (nonlinear response) of PZT-based ceramics when an electrical bias field is applied is reported in this work. Large differences are observed between soft and hard PZT behaviours. While in soft PZT a bias field does not modify the nonlinear behaviour, a notable dependence is verified in hard PZT. The Preisach model is satisfactorily used to describe experimental results. A distribution function containing the first terms of the Maclaurin development series of a function composed by two Gaussian-like functions of different amplitudes is proposed. The model gives a satisfactory explanation for the fact that the permittivity depends not only on the amplitude of the applied electric field, but also on the bias field, both for soft and hard ceramics and for poled or unpoled samples.
CitationOchoa, D. A.; Perez, R.A.; Garcia, J. E. Preisach modelling of nonlinear response in electrically biased lead zirconate titanate-based piezoceramics. "Applied physics A. Materials science and processing", Setembre 2013, vol. 112, núm. 4, p. 1081-1088.
URIhttp://hdl.handle.net/2117/20224
DOI10.1007/s00339-012-7492-3
ISSN0947-8396
Publisher versionhttp://download.springer.com/static/pdf/856/art%253A10.1007%252Fs00339-012-7492-3.pdf?auth66=1380465443_2c7499b5ea3429a10adbcb893857386a&ext=.pdf
Collections
Share: