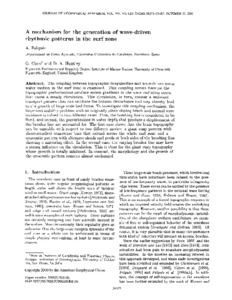 The coupling between topographic irregularities and wave-driven mean water motion in the surf zone is examined. This coupling occurs because the topographic perturbations produce excess gradients in the wave radiation stress that cause a steady circulation. This circulation, in turn, creates a sediment transport pattern that can reinforce the bottom disturbance and may thereby lead to the growth of large-scale bed forms. To investigate this coupling mechanism, the linearized stability problem with an originally plane sloping beach and normal wave incidence is solved in two different cases. First, the breaking line is considered to be fixed, and second, the perturbations in water depth that produce a displacement of the breaker line are accounted for. The first case shows that the basic topography can be unstable with respect to two different modes: a giant cusp pattern with shore-attached transverse bars that extend across the whole surf zone and a crescentic pattern with alternate shoals and pools at both sides of the breaking line showing a mirroring effect. In the second case, the varying breaker line may have a strong influence on the circulation. This is clear for the giant cusp topography whose growth is totally inhibited. In contrast, the morphology and the growth of the crescentic pattern remains almost unchanged.
CitationFalques, A.; Coco, G.; Huntley, D. A mechanism for the generation of wave-driven rhythmic patterns in the surf zone. "Journal of geophysical research", Octubre 2000, vol. 105, núm. C10, p. 24071-24087.
URIhttp://hdl.handle.net/2117/20149
DOI10.1029/2000JC900100
ISSN0148-0227
Publisher versionhttp://onlinelibrary.wiley.com/doi/10.1029/2000JC900100/abstract;jsessionid=E16794E829B3D8BF09BC08FF61482ED2.d01t01