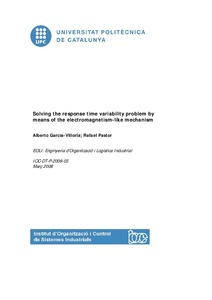 The Response Time Variability Problem (RTVP) is an NP-hard combinatorial scheduling problem that has recently appeared in the literature. The RTVP has a wide range of real-life applications such as in the automobile industry, when models to be produced on a mixed-model assembly line have to be sequenced. The RTVP occurs whenever products, clients or jobs need to be sequenced so as to minimize variability in the time between the instants at which they receive the necessary resources. The field of Artificial Intelligence has provided us with efficient tools such as metaheuristic techniques for solving complex combinatorial scheduling problems. In a previous study, three metaheuristic algorithms (a multi-start, a GRASP and a PSO algorithm) were proposed to solve the RTVP. These three metaheuristic algorithms have been most efficient, until now, in solving non-small instances of the RTVP. We propose solving the RTVP by means of the electromagnetism-like mechanism (EM) metaheuristic algorithm. The EM algorithm is based on an analogy with the attraction-repulsion mechanism of the electromagnetism theory, where solutions are moved according to their associated charges. In this paper we compare the proposed EM metaheuristic procedure with the three metaheuristic algorithms previously mentioned and show that, on average, the EM procedure improves on the obtained results.
URIhttp://hdl.handle.net/2117/2013