A mechanism for sandbar straightening by oblique wave incidence 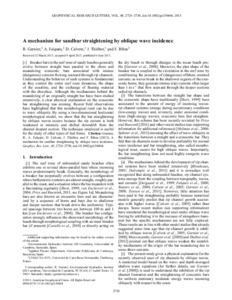 Breaker bars in the surf zone of sandy beaches generally evolve between straight bars parallel to the shore and meandering crescentic bars associated with intense (dangerous) currents flowing seaward through rip channels. Understanding the behavior of such systems is fundamental as they control the entire surf zone dynamics, the shape of the coastline, and the exchange of floating material with the shoreface. Although the mechanisms behind the meandering of an originally straight bar have been studied extensively, a clear physical explanation on the crescentic bar straightening was missing. Recent field observations have highlighted that this morphological reset can be due to wave obliquity. By using a two-dimensional horizontal morphological model, we show that the bar straightening by oblique waves occurs because the rip current is both weakened in intensity and shifted downdrift from the channel deepest section. The technique employed is useful for the study of other types of bed forms.
CitationGarnier, R. [et al.]. A mechanism for sandbar straightening by oblique wave incidence. "Geophysical research letters", 06 Juny 2013, vol. 40, núm. 11, p. 2726-2730.
URIhttp://hdl.handle.net/2117/20100
DOI10.1002/grl.50464
ISSN0094-8276
Publisher versionhttp://onlinelibrary.wiley.com/doi/10.1002/grl.50464/abstract