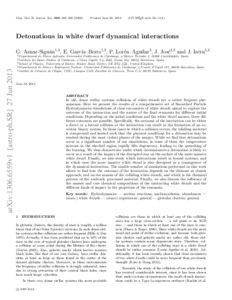 Isern Vilaboy, Jordi
Document typeArticle
Rights accessOpen Access
Abstract
n old, dense stellar systems collisions of white dwarfs are a rather frequent phenomenon. Here we present the results of a comprehensive set of Smoothed Particle Hydrodynamics simulations of close encounters of white dwarfs aimed to explore the outcome of the interaction and the nature of the final remnants for different initial conditions. Depending on the initial conditions and the white dwarf masses, three different outcomes are possible. Specifically, the outcome of the inte raction can be either a direct or a lateral collision or the interaction can result in the formation of an eccentric binary system. In those cases in which a collision occurs, the infalling material is compressed and heated such that the physical conditions for a detonation may be reached during the most violent phases of the merger. While we find t hat detonations occur in a significant umber of our simulations, in some of them the te mperature increase in the shocked region rapidly lifts degeneracy, leading to the quenching of the burning. We thus characterize under which circumstances a de tonation is likely to occur as a result of the impact of the disrupted star on the surface of the more massive white dwarf. Finally, we also study which interactions result in bound systems, and in which ones the more massive white dwarf is also disrupted as a consequence of the dynamical interaction. The sizable number of simulations performed in this work allows to find how the outcome of the interaction depends on the distance at closest approach, and on the masses of the colliding white dwarfs, and which is the chemical pattern of the nuclearly processed material. Finally, we also discuss the influence of the masses and core chemical compositions of the interacting white dwarfs and the different kinds of impact in the properties of the remnants
CitationAznar, G. [et al.]. Detonations in white dwarf dynamical interactions. "Monthly notices of the Royal Astronomical Society", 2013, vol. 434, núm. 3, p. 2539-2555.
URIhttp://hdl.handle.net/2117/20088
ISSN0035-8711
Publisher versionhttp://arxiv.org/abs/1306.6559
Collections
Share: