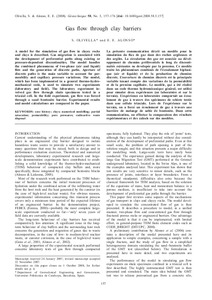 Document typeArticle
Rights accessOpen Access
Abstract
A model for the simulation of gas flow in clayey rocks and clays is described. Gas migration is associated with the development of preferential paths along existing or pressure-dependent discontinuities. The model handles the combined phenomena of two-phase (air and liquid) flow and the generation of discrete paths. Aperture of discrete paths is the main variable to account for permeability and capillary pressure variations. The model, which has been implemented in a general thermo-hydromechanical code, is used to simulate two experiments (laboratory and field). The laboratory experiment involved gas flow through shale specimens tested in a triaxial cell. In the field experiment, gas flow was forced through a sand–bentonite barrier. Experimental results and model calculations are compared in the paper.
Description
The Geotechnical Research Medal, in 2008, presented for the best paper on geological research
CitationOlivella, S.; Alonso, E. Gas flow through clay barriers. "G¿otechnique", Abril 2008, vol. 58, núm. 3, p. 157-176.
Award-winningAward-winning
URIhttp://hdl.handle.net/2117/20074
DOI10.1680/geot.2008.58.3.157
ISSN0016-8505
Collections
Share: