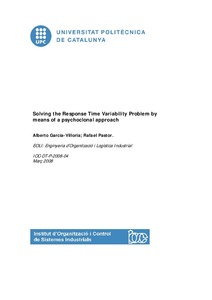 Except where otherwise noted, content on this work is licensed under a Creative Commons license : Attribution-NonCommercial-NoDerivs 2.5 Spain
Abstract
The Response Time Variability Problem (RTVP) is a combinatorial scheduling problem which has recently appeared in the literature. This problem has a wide range of reallife applications in, for example, manufacturing, hard real-time systems, operating systems and network environment. Originally, the RTVP occurs whenever products, clients or jobs need to be sequenced in such a way that the variability in the time between the instants at which they receive the necessary resources is minimized. Since RTVP is hard to solve, heuristic techniques are needed for solving it. In a previous study, three metaheuristic algorithms (a multi-start, a GRASP and a PSO algorithm) were proposed to solve the RTVP. These three metaheuristic algorithms have been the most efficient to date in solving non-small instances of the RTVP. We propose solving the RTVP by means of a psychoclonal algorithm based approach. The psychoclonal algorithm inherits its attributes from the need hierarchy theory proposed by Maslow and the artificial immune system (AIS) approach, specifically the clonal selection principle. In this paper we compare the proposed psychoclonal algorithm with the other three metaheuristic algorithms previously mentioned and show that, on average, the psychoclonal algorithm strongly improves the obtained results.
URIhttp://hdl.handle.net/2117/2007
Collections
Share: