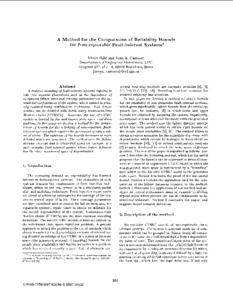 Document typeConference report
Rights accessOpen Access
Abstract
A realistic modeling of fault-tolerant systems requires to take into account phenomena such as the dependence of component failure rates and coverage parameters on the operational configuration of the system, which cannot be properly captured using combinatorial techniques. Such dependencies can be modeled with detail using continuous-time Markov chains (CTMC’s). However, the use of CTMC models is limited by the well-known state space explosion problem. In this paper we develop a method for the computation of bounds for the reliability of non-repairable fault-tolerant systems which requires the generation of only a subset of states. The tightness of the bounds increases as more detailed states are generated. The method uses the failure distance concept and is illustrated using an example of a quite complex fault-tolerant system whose failure behavior has the above mentioned types of dependencies.
CitationSuñe, V.; Carrasco, J. A method for the computation of reliability bounds for non-repairable fault-tolerant systems. A: IEEE International Symposium on Modelling, Analysis and Simulation of Computer and Telecommunication Systems. "Proc. 5th IEEE Int. Symp. on Modeling, Analysis and Simulation of Computer and Telecommunication Systems". 1997, p. 221-228.
URIhttp://hdl.handle.net/2117/20055
Collections
Share: