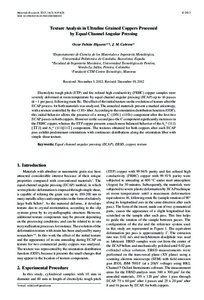 Except where otherwise noted, content on this work is licensed under a Creative Commons license : Attribution-NonCommercial-NoDerivs 3.0 Spain
Abstract
Electrolytic tough pitch (ETP) and fire refined high conductivity (FRHC) copper samples were severely deformed at room temperature by equal channel angular pressing (ECAP) up to 16 passes ( ε ~ 1 per pass), following route Bc. The effect of the initial texture on the evolution of texture after the ECAP process for both materials was analyzed. The annealed materials present a marked anisotropy, with a texture controlled by the <110> fiber. According to the orientation distribution function (ODF), this initial behavior allows the presence of a strong C ({001} <110>) component after the first two ECAP passes in both coppers. However in the second pass the C component significantly increases in the FRHC copper, whereas the ETP copper presents a much more balanced behavior of the A 1 * (111) [ 11 2] and A 2 * (111)[11 2 ] components. The textures obtained for both coppers after each ECAP pass exhibit predominant orientations with continuous distributions along the orientation fiber with simple shear texture.
CitationHiguera, O.; Cabrera, J. Texture analysis in ultrafine grained coppers processed by equal channel angular pressing. "Materials Research-Ibero-american Journal of Materials", Maig 2013, vol. 16, núm. 3, p. 619-624.
URIhttp://hdl.handle.net/2117/20004
DOI10.1590/S1516-14392013005000032
ISSN1516-1439
Collections
Share: