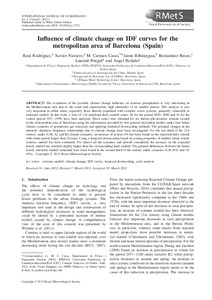 Pouget, Laurent
Redaño, Angel
Document typeArticle
PublisherJohn Wiley & Sons
Rights accessOpen Access
Abstract
The evaluation of the possible climate change influence on extreme precipitation is very interesting in the Mediterranean area due to the usual and characteristic high intensities of its rainfall pattern. This analysis is also very important in urban zones, especially those densely populated with complex sewer systems, generally vulnerable to torrential rainfall. In this work, a total of 114 simulated daily rainfall series, 84 for the period 2000–2099 and 30 for the control period 1951–1999, have been analysed. These series were obtained for six thermo-pluviometric stations located in the metropolitan area of Barcelona using the information provided by five general circulation models under four future climate scenarios of greenhouse gas emissions and applying statistical downscaling methods. The potential changes in the intensity–duration–frequency relationships due to climate change have been investigated. For the last third of the 21st century, under A1B, A2 and B2 climate scenarios, an increase of at least 4% has been found on the expected daily rainfall with return period longer than 20 years. Using a temporal downscaling based on scaling properties of rainfall, future hourly extreme rainfall has been estimated. For almost all the scenarios and periods considered, the increase on the expected hourly rainfall has resulted slightly higher than the corresponding daily rainfall. The greatest differences between the future hourly and daily rainfall estimated have been found in the second third of the century under scenarios A1B (8%) and A2 (9%)
Location
1: Area Metropolitana de Barcelona, Espanya
CitationRodriguez, R. [et al.]. Influence of climate change on IDF curves for the metropolitan area of Barcelona (Spain). "International journal of climatology", 06 Maig 2013.
URIhttp://hdl.handle.net/2117/19960
DOI10.1002/joc.3712
ISSN0899-8418
Collections
Share: