Phase diagrams of He-4 on flat and curved environments 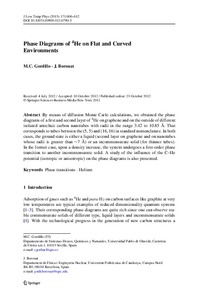 Document typeArticle
Rights accessOpen Access
Abstract
By means of diffusion Monte Carlo calculations, we obtained the phase diagrams of a first and second layer of 4He on graphene and on the outside of different isolated armchair carbon nanotubes with radii in the range 3.42 to 10.85 Å. That corresponds to tubes between the (5, 5) and (16, 16) in standard nomenclature. In both cases, the ground state is either a liquid (second layer on graphene and on nanotubes whose radii is greater than ∼7 Å) or an incommensurate solid (for thinner tubes). In the former case, upon a density increase, the system undergoes a first-order phase transition to another incommensurate solid. A study of the influence of the C–He potential (isotropic or anisotropic) on the phase diagrams is also presented.
CitationGordillo, M. C.; Boronat, J. Phase diagrams of He-4 on flat and curved environments. "Journal of low temperature physics", Juny 2013, vol. 171, núm. 5-6, p. 606-612.
URIhttp://hdl.handle.net/2117/19857
DOI10.1007/s10909-012-0790-5
ISSN0022-2291
Publisher versionhttp://link.springer.com/content/pdf/10.1007%2Fs10909-012-0790-5.pdf
Collections
Share: