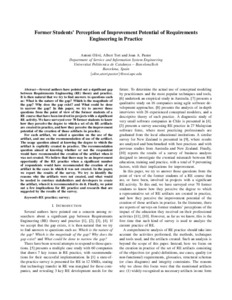 Document typeExternal research report
Rights accessOpen Access
Abstract
Several authors have pointed out a significant gap between Requirements Engineering (RE) theory and practice. It is then natural that we try to find answers to questions such as: What is the nature of the gap? Which is the magnitude of the gap? Why does the gap exist? and What could be done to narrow the gap? In this paper, we try to answer those questions from the point of view of the former students of a RE course that have been involved in projects with a significant RE activity. We have surveyed over 70 former students to know how they perceive the degree to which a set of six RE artifacts are created in practice, and how they perceive the improvement potential of the creation of those artifacts in practice. For each artifact, we asked a question on the use of the artifact, and one on the recommendation of use of the artifact. The usage question aimed at knowing the degree to which the artifact is explicitly created in practice. The recommendation question aimed at knowing whether or not the respondent would have recommended the creation of the artifact when it was not created. We believe that there may be an improvement opportunity of the RE practice when a significant number of respondents would have recommended the creation of an artifact in the cases in which it was not created. In the paper, we report the results of the survey. We try to identify the reasons why the artifacts were not created, and what would be needed to convince stakeholders and developers to create the artifact, when it is recommended to do it. Finally, we point out a few implications for RE practice and research that are suggested by the results of the survey
CitationTort, A.; Olive, A.; Pastor, J. "Former students’ perception of improvement potential of requirements engineering in practice". 2013.
URIhttp://hdl.handle.net/2117/19766
Collections
Share: