The biological origin of linguistic diversity 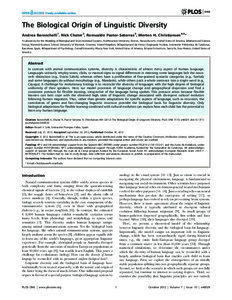 In contrast with animal communication systems, diversity is characteristic of almost every aspect of human language. Languages variously employ tones, clicks, or manual signs to signal differences in meaning; some languages lack the noun-verb distinction (e.g., Straits Salish), whereas others have a proliferation of fine-grained syntactic categories (e.g., Tzeltal); and some languages do without morphology (e.g., Mandarin), while others pack a whole sentence into a single word (e.g., Cayuga). A challenge for evolutionary biology is to reconcile the diversity of languages with the high degree of biological uniformity of their speakers. Here, we model processes of language change and geographical dispersion and find a consistent pressure for flexible learning, irrespective of the language being spoken. This pressure arises because flexible learners can best cope with the observed high rates of linguistic change associated with divergent cultural evolution following human migration. Thus, rather than genetic adaptations for specific aspects of language, such as recursion, the coevolution of genes and fast-changing linguistic structure provides the biological basis for linguistic diversity. Only biological adaptations for flexible learning combined with cultural evolution can explain how each child has the potential to learn any human language.
CitationBaronchelli, A. [et al.]. The biological origin of linguistic diversity. "PLoS One", 30 Octubre 2012, vol. 7, núm. 10, p. 1-6.
URIhttp://hdl.handle.net/2117/19607
DOI10.1371/journal.pone.0048029
ISSN1932-6203
Publisher versionhttp://www.plosone.org/article/info%3Adoi%2F10.1371%2Fjournal.pone.0048029