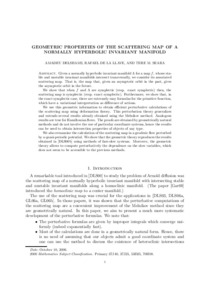 Given a normally hyperbolic invariant manifold Λ for a map f , whose stable and unstable invariant manifolds intersect transversally, we consider its associated scattering map. That is, the map that, given an asymptotic orbit in the past, gives the asymptotic orbit in the future. We show that when f and Λ are symplectic (respectively exact symplectic) then, the scattering map is symplectic (respectively exact symplectic). Furthermore, we show that, in the exact symplectic case, there are extremely easy formulas for the primitive function, which have a variational interpretation as difference of actions. We use this geometric information to obtain efficient perturbative calculations of the scattering map using deformation theory. This perturbation theory generalizes and extends several results already obtained using the Melnikov method. Analogous results are true for Hamiltonian flows. The proofs are obtained by geometrically natural methods and do not involve the use of particular coordinate systems, hence the results can be used to obtain intersection properties of objects of any type. We also reexamine the calculation of the scattering map in a geodesic flow perturbed by a quasi-periodic potential. We show that the geometric theory reproduces the results obtained in [Amadeu Delshams, Rafael de la Llave, Tere M. Seara, Orbits of unbounded energy in quasi-periodic perturbations of geodesic flows, Adv. Math. 202 (1) (2006) 64–188] using methods of fast–slow systems. Moreover, the geometric theory allows to compute perturbatively the dependence on the slow variables, which does not seem to be accessible to the previous methods.
Version ofhttp://hdl.handle.net/2117/542
CitationDelshams, Amadeu; Llave Canosa, Rafael de la; Seara, Tere M. Geometric properties of the scattering map of a normally hyperbolic invariant manifold. Advances in mathematics, 2008, vol. 217, núm. 3, p. 1096-1153
URIhttp://hdl.handle.net/2117/1957
ISSN0001-8708