Molecular determinants of the bacterial resistance to fluoroquinolones: A computational study 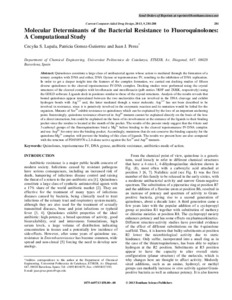 Except where otherwise noted, content on this work is licensed under a Creative Commons license : Attribution-NonCommercial-NoDerivs 3.0 Spain
Abstract
Abstract: Quinolones constitute a large class of antibacterial agents whose action is mediated through the formation of a ternary complex with DNA and either, DNA Gyrase or topoisomerase IV, resulting in the inhibition of DNA replication. In order to get a deeper insight into the features of the complex formation, we carried out docking studies of fifteen diverse quinolones to the cleaved topoisomerase IV-DNA complex. Docking studies were performed using the crystal structures of the cleaved complex with levofloxacin and moxifloxacin (pdb entries 3K9F and 2XKK, respectively) using the GOLD software. Ligands dock in positions similar to those of the crystal structures. Analysis of the results reveals that bound quinolones appear intercalated between the two nucleotides that are involved in the DNA cleavage and exhibit hydrogen bonds with Arg117 and, the latter mediated though a water molecule. Arg117 has not been described to be involved in resistance, since it is putatively involved in the enzymatic reaction and its mutation would be lethal for the organism. Mutants of Ser79 exhibit resistance to quinolones which can be explained by the loss of an important anchoring point. Interestingly, quinolone resistance observed in Asp83 mutants cannot be explained directly on the basis of the loss of a direct interaction, but could be explained on the basis of its involvement at the entrance of the ligands to their binding pocket since the residue is located at the mouth of the pocket. The results of the present study suggest that the 4-keto and 3-carboxyl groups of the fluoroquinolones bind a Mg2+ before binding to the cleaved topoisomarase IV-DNA complex and use Asp83 for entry into the binding pocket. Accordingly, mutations that do not conserve the binding capacity for the quinolone-Mg2+ complex will prevent the binding of this class of ligands. The results we present here are also compared with the structure of PD0305970 a 2,4-dione active against the Ser79 and Asp83 mutants.
CitationLupala, C.; Gomez-Gutierrez, P.; Perez, J. Molecular determinants of the bacterial resistance to fluoroquinolones: A computational study. "Current Computer-Aided Drug Design", 13 Juny 2013, vol. 9, núm. 2, p. 281-288.
URIhttp://hdl.handle.net/2117/19563
ISSN1875-6697
Publisher versionhttp://www.eurekaselect.com/111590/article
Collections
Share: