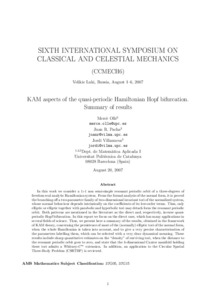 Document typeConference report
Publishers.n.
Rights accessOpen Access
Abstract
In this work we consider a 1:-1 non semi-simple resonant periodic orbit of a three-degrees of freedom real analytic Hamiltonian system. From the formal analysis of the normal form, it is proved the branching off a two-parameter family of two-dimensional invariant tori of the normalised system, whose normal behaviour depends intrinsically on the coefficients of its low-order terms. Thus, only elliptic or elliptic together with parabolic and hyperbolic tori may detach form the resonant periodic orbit. Both patterns are mentioned in the literature as the direct and, respectively, inverse quasiperiodic Hopf bifurcation. In this report we focus on the direct case, which has many applications in several fields of science. Thus, we present here a summary of the results, obtained in the framework of KAM theory, concerning the persistence of most of the (normally) elliptic tori of the normal form, when the whole Hamiltonian is taken into account, and to give a very precise characterisation of the parameters labelling them, which can be selected with a very clear dynamical meaning. These results include sharp quantitative estimates on the “density” of surviving tori, when the distance to the resonant periodic orbit goes to zero, and state that the 4-dimensional Cantor manifold holding these tori admits a Whitney-C^\infty extension. In addition, an application to the Circular Spatial Three-Body Problem (CSRTBP) is reviewed.
CitationOllé, M.; Pacha, J.R.; Villanueva, J. KAM aspects of the quasi-periodic Hamiltonian Hopf bifurcation: summary of results. A: International Symposium on Classical and Celestial Mechanics. 6è. Moscú, [s.n], 2007
URIhttp://hdl.handle.net/2117/1956
Collections
Share: