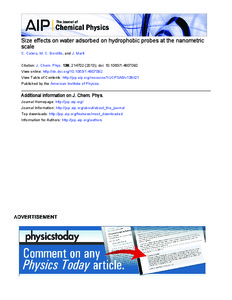 Document typeArticle
Rights accessOpen Access
Abstract
Molecular dynamics simulations of liquid water at ambient conditions, adsorbed at the external walls of (n,n) single-walled armchair carbon nanotubes have been performed for n = 5, 9, 12. The comparison with the case of water adsorbed on graphene has also been included. The analysis of Helmholtz free energies reveals qualitatively different ranges of thermodynamical stability, eventually starting at a given threshold surface density. We observed that, in the framework of the force field considered here, water does not wet graphene nor (12,12) tubes, but it can coat thinner tubes such as (9,9) and (5,5), which indicates that the width of the carbon nanotube plays a role on wetting. On the other hand, density profiles, orientational distributions of water, and hydrogen-bond populations indicate significant changes of structure of water for the different surfaces. Further, we computed self-diffusion of water and spectral densities of water and carbon molecules, which again revealed different qualitative behavior of interfacial water depending on the size of the nanotube. The crossover size corresponds to tube diameters of around 1 nm.
CitationCalero, C.; Gordillo, C.; Marti, J. Size effects on water adsorbed on hydrophobic probes at the nanometric scale. "Journal of chemical physics", 03 Juny 2013, vol. 138, núm. 21, p. 214702-1-214702-8.
URIhttp://hdl.handle.net/2117/19503
DOI10.1063/1.4807092
ISSN0021-9606
Publisher versionhttp://jcp.aip.org/resource/1/jcpsa6/v138/i21/p214702_s1
Collections
Share: