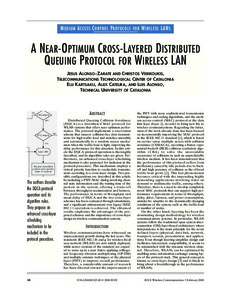 Document typeArticle
PublisherIEEE-INST ELECTRICAL ELECTRONICS ENGINEERS INC
Rights accessOpen Access
All rights reserved. This work is protected by the corresponding intellectual and industrial property rights. Without prejudice to any existing legal exemptions, reproduction, distribution, public communication or transformation of this work are prohibited without permission of the copyright holder
Abstract
Distributed Queuing Collision Avoidance (DQCA) is a distributed MAC protocol for WLAN systems that offers near optimum performance. The protocol implements a reservation scheme that ensures collision-free data transmissions for high traffic load and switches smoothly and automatically to a random access mechanism when the traffic load is light, improving the delay performance for this situation. In this article the DQCA protocol operation is thoroughly described, and its algorithm rules are given. Furthermore, an enhanced cross-layer scheduling mechanism is also proposed for inclusion in the protocol procedure. This mechanism employs a virtual priority function to reschedule transmissions according to a cross-layer design. Two possible configurations are described in this article by including a PHY-MAC dialog involving channel state information and the waiting time of the packets in the system, offering a trade-off between throughput maximization and fairness. The performance in terms of throughput and mean delay of DQCA and the two cross-layer schemes has been evaluated through simulations, and a significant enhancement over legacy IEEE 802.11 operation is achieved. The obtained results emphasize the advantages of the proposed schemes and the importance of cross-layer design in wireless communication systems.
CitationAlonso Zárate, J; Verikoukis C; Kartsakli, E; Cateura Díaz, A; Alonso Zárate, L.G. A near-optimum cross-layered distributed queuing protocol for wireless LAN. IEEE Wireless Communications Magazine, 2008, vol.15, núm. 1, pàg. 48-55
URIhttp://hdl.handle.net/2117/1948
ISSN1536-1248
Collections
Share: