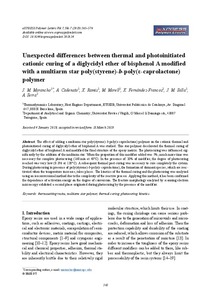 The effect of adding a multiarm star poly(styrene)-b-poly("-caprolactone) polymer on the cationic thermal and photoinitiated curing of diglycidyl ether of bisphenol A was studied. This star-polymer decelerated the thermal curing of diglycidyl ether of bisphenol A and modified the final structure of the epoxy matrix. The photocuring was influenced significantly by the addition of the multiarm star. When the proportion of this modifier added was 5%, much more time was necessary for complete photocuring (160 min at 40ºC). In the presence of 10% of modifier, the degree of photocuring reached was very low (0.196 at 120°C). A subsequent thermal post-curing was necessary to cure completely the system. During photocuring in presence of poly(styrene)-b-poly("-caprolactone), the formation of dormant species, which are reactivated when the temperature increases, takes places. The kinetics of the thermal curing and the photocuring was analyzed using an isoconversional method due to the complexity of the reactive process. Applying this method, it has been confirmed the dependence of activation energy on the degree of conversion. The fracture morphology analyzed by scanning electron microscopy exhibited a second phase originated during photocuring by the presence of the modifier.
CitationMorancho, J. [et al.]. Unexpected differences between thermal and photoinitiated cationic curing oa a diglycidyl ether of bisphenol. A modified with a multiarm star poly (styrene)-b-poly (e-caprolactone) polymer. "Express polymer letters", 18 Març 2013, vol. 7, núm. 7, p. 565-576.
URIhttp://hdl.handle.net/2117/19379
DOI10.3144/expresspolymlett.2013.54
ISSN1788-618X
Publisher versionhttp://www.expresspolymlett.com