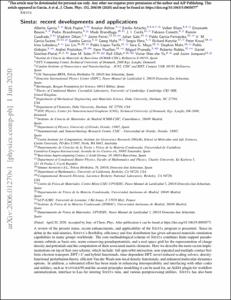 Ordejón, Pablo
Postnikov, Andrei
Pouillon, Yann
Pruneda, Miguel
Robles, Roberto
Sánchez Portal, Daniel
Soler, Jose M.
Ullah, Raffi
Wen-zhe Yu, Víctor
Junquera, Javier
Document typeArticle
PublisherAIP Publishing
Rights accessOpen Access
All rights reserved. This work is protected by the corresponding intellectual and industrial property rights. Without prejudice to any existing legal exemptions, reproduction, distribution, public communication or transformation of this work are prohibited without permission of the copyright holder
ProjectMaX - MAterials design at the eXascale. European Centre of Excellence in materials modelling, simulations, and design (EC-H2020-824143)
Abstract
A review of the present status, recent enhancements, and applicability of the Siesta program is presented. Since its debut in the mid-1990s, Siesta's flexibility, efficiency, and free distribution have given advanced materials simulation capabilities to many groups worldwide. The core methodological scheme of Siesta combines finite-support pseudo-atomic orbitals as basis sets, norm-conserving pseudopotentials, and a real-space grid for the representation of charge density and potentials and the computation of their associated matrix elements. Here, we describe the more recent implementations on top of that core scheme, which include full spin-orbit interaction, non-repeated and multiple-contact ballistic electron transport, density functional theory (DFT)+U and hybrid functionals, time-dependent DFT, novel reduced-scaling solvers, density-functional perturbation theory, efficient van der Waals non-local density functionals, and enhanced molecular-dynamics options. In addition, a substantial effort has been made in enhancing interoperability and interfacing with other codes and utilities, such as wannier90 and the second-principles modeling it can be used for, an AiiDA plugin for workflow automatization, interface to Lua for steering Siesta runs, and various post-processing utilities. Siesta has also been engaged in the Electronic Structure Library effort from its inception, which has allowed the sharing of various low-level libraries, as well as data standards and support for them, particularly the PSeudopotential Markup Language definition and library for transferable pseudopotentials, and the interface to the ELectronic Structure Infrastructure library of solvers. Code sharing is made easier by the new open-source licensing model of the program. This review also presents examples of application of the capabilities of the code, as well as a view of on-going and future developments.
CitationGarcía, A. [et al.]. Siesta: Recent developments and applications. "The Journal of Chemical Physics", 2020, vol. 152, núm. 20.
URIhttp://hdl.handle.net/2117/193047
DOI10.1063/5.0005077
ISSN1089-7690
Publisher versionhttps://aip.scitation.org/doi/10.1063/5.0005077
Collections
Share: