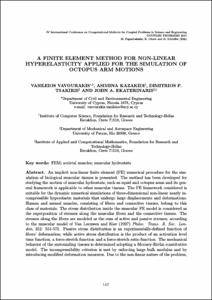 Show full item record
Vavourakis, Vasileios
Kazakidi, Asimina
Tsakiris, Dimitrios P.
Ekaterinaris, John A.
Document typeConference report
PublisherCIMNE
Rights accessOpen Access
Abstract
An implicit non-linear finite element (FE) numerical procedure for the simulation of biological muscular tissues is presented. The method has been developed for studying the motion of muscular hydrostats, such as squid and octopus arms and its general framework is applicable to other muscular tissues. The FE framework considered is suitable for the dynamic numerical simulations of three-dimensional non-linear nearly incompressible hyperelastic materials that undergo large displacements and deformations. Human and animal muscles, consisting of fibers and connective tissues, belong to this class of materials. The stress distribution inside the muscular FE model is considered as the superposition of stresses along the muscular fibers and the connective tissues. The stresses along the fibers are modeled as the sum of active and passive stresses, according to the muscular model of Van Leeuwen and Kier (1997) Philos. Trans. R. Soc. London, 352: 551-571. Passive stress distribution is an experimentally-defined function of fibers’ deformation; while active stress distribution is the product of an activation level time function, a force-stretch function and a force-stretch ratio function. The mechanical behavior of the surrounding tissues is determined adopting a Mooney-Rivlin constitutive model. The incompressibility criterion is met by enforcing large bulk modulus and by introducing modified deformation measures. Due to the non-linear nature of the problem, approximate determination of the Jacobian matrix is performed, in order to utilize the full Newton-Raphson iterative procedure within each time-step. In addition, time discretization is performed via the implicit Newmark method. We developed an open-source finite element code that is capable of simulating large deflection maneuvers of muscular hydrostats. The proposed methodology is validated by comparing the numerical results with existing measurements for the squid arm extension. The efficiency and robustness of the proposed numerical method is demonstrated through a series of octopus arm maneuvers, such as extension, compression and bending.
URIhttp://hdl.handle.net/2117/193018
ISBN978-84-89925-78-6
Collections
Share: