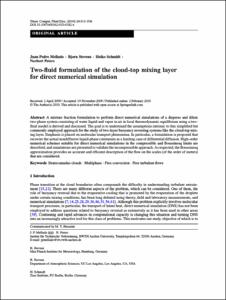 Except where otherwise noted, content on this work is licensed under a Creative Commons license : Attribution-NonCommercial-NoDerivs 3.0 Spain
Abstract
A mixture fraction formulation to perform direct numerical simulations of a disperse and dilute two-phase system consisting of water liquid and vapor in air in local thermodynamic equilibrium using a two fluid model is derived and discussed. The goal is to understand the assumptions intrinsic to this simplified but commonly employed approach for the study of two-layer buoyancy reversing systems like the cloud-top mixing layer. Emphasis is placed on molecular transport phenomena. In particular, a formulation is proposed that recovers the actual non diffusive liquid-phase continuum as a limiting case of differential diffusion. High-order numerical schemes suitable for direct numerical simulations in the compressible and Boussinesq limits are described, and simulations are presented to validate the incompressible approach. As expected, the Boussinesq approximation provides an accurate and efficient description of the flow on the scales (of the order of meters) that are considered.
CitationMellado, J. P. [et al.]. Two-fluid formulation of the cloud-top mixing layer for direct numerical simulation. "Theoretical and computational fluid dynamics", 2 Febrer 2010, vol. 24, p. 511-536.
URIhttp://hdl.handle.net/2117/192971
DOI10.1007/s00162-010-0182-x
ISSN0935-4964
Publisher versionhttps://link.springer.com/article/10.1007/s00162-010-0182-x
Collections
Share: