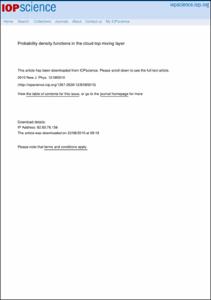 Stevens, Bjorn
Schmidt, Heiko
Peters, Norbert
Document typeArticle
Rights accessOpen Access
Abstract
The cloud-top mixing layer is an idealized configuration often employed in the literature to study local aspects (over length scales of the order of 10 m) of the top of stratocumulus-topped mixed layers. Latent heat effects are further investigated here by means of direct numerical simulations, discussing the probability density functions of the horizontal and vertical velocities, as well as the mixture fraction (equal to a normalized enthalpy and total water-specific humidity). The focus is on the turbulent convection layer that develops from the buoyancy reversal instability as a consequence of the evaporative cooling at the upper cloud boundary. An approximately self-similar behavior is found, where the convection scales based on the molecular buoyancy flux at the cloud top characterize the distributions at different times, at least to leading order and within the statistical convergence achieved in the simulations. However, a very strong vertical variation in the density functions across the turbulent convection layer is found, which is of relevance to possible models. Non-Gaussian behavior is often observed, even in the horizontal component of the velocity vector. In particular, large values of skewness and flatness are measured at the lower end of the turbulent zone, where external intermittency is very strong.
CitationMellado, J. P. [et al.]. Probability density functions in the cloud-top mixing layer. "New journal of physics", 19 Agost 2010, vol. 12, núm. 085010, p. 1-16.
URIhttp://hdl.handle.net/2117/192969
DOI10.1088/1367-2630/12/8/085010
ISSN1367-2630
Publisher versionhttps://iopscience.iop.org/article/10.1088/1367-2630/12/8/085010/meta
Collections
Share: