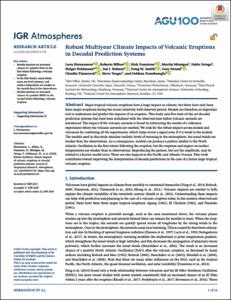 Pohlmann, Holger
Robson, Jon I
Smith, Doug M.
Strand, Gary
Timmreck, Claudia
Yeager, Steve
Danabasoglu, Gokhan
Document typeArticle
PublisherWiley
Rights accessOpen Access
Abstract
Major tropical volcanic eruptions have a large impact on climate, but there have only been three major eruptions during the recent relatively well‐observed period. Models are therefore an important tool to understand and predict the impacts of an eruption. This study uses five state‐of‐the‐art decadal prediction systems that have been initialized with the observed state before volcanic aerosols are introduced. The impact of the volcanic aerosols is found by subtracting the results of a reference experiment where the volcanic aerosols are omitted. We look for the robust impact across models and volcanoes by combining all the experiments, which helps reveal a signal even if it is weak in the models. The models used in this study simulate realistic levels of warming in the stratosphere, but zonal winds are weaker than the observations. As a consequence, models can produce a pattern similar to the North Atlantic Oscillation in the first winter following the eruption, but the response and impact on surface temperatures are weaker than in observations. Reproducing the pattern, but not the amplitude, may be related to a known model error. There are also impacts in the Pacific and Atlantic Oceans. This work contributes toward improving the interpretation of decadal predictions in the case of a future large tropical volcanic eruption.
Related documenthttps://agupubs.onlinelibrary.wiley.com/action/downloadSupplement?doi=10.1029%2F2019JD031739&file=jgrd56215-sup-0001-Figure_SI-S01.pdf
CitationHermanson, L. [et al.]. Robust Multiyear Climate Impacts of Volcanic Eruptions in Decadal Prediction Systems. "Journal of Geophysical Research: Atmospheres", 2020, vol. 125, e2019JD031739.
URIhttp://hdl.handle.net/2117/192942
DOI10.1029/2019JD031739
ISSN2169-8996
Publisher versionhttps://agupubs.onlinelibrary.wiley.com/doi/full/10.1029/2019JD031739
Collections
Share: