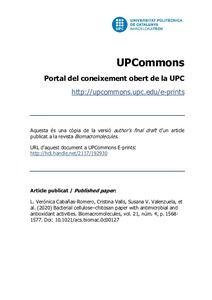 Javier Pastor, F.I.
Diaz Lucea, M. Pilar
Martínez Martínez, Josefina
Document typeArticle
Rights accessOpen Access
Abstract
The production of paper-based bacterial cellulose-chitosan (BC-Ch) nanocomposites was accomplished following two different approaches. In the first, BC paper sheets were produced and then immersed in an aqueous solution of chitosan(BC-ChI); in the second, BC pulp was impregnated with chitosan prior to the production of paper sheets (BC-ChM). BC-Ch nanocomposites were investigated in terms of physical characteristics, antimicrobial and antioxidant properties, and the ability to inhibit the formation of biofilms on their surface. The two types of BC-Ch nanocomposites maintained the hydrophobic character, the air barrier properties, and the high crystallinity of the BC paper. However, BC-ChI showed a surface with a denser fiber network and with smaller pores than those of BC-ChM. Only 5% of the chitosan leached from the BC-Ch nanocomposites after 96 h of incubation in an aqueous medium, indicating that it was well retained by the BC paper matrix. BC-Ch nanocomposites displayed antimicrobial activity, inhibiting growth of and having a killing effect against bacteria Staphylococcus aureus and Pseudomonas aeruginosa and yeast Candida albicans. Moreover, BC-Ch papers showed activity against the formation of a biofilm on their surface.The incorporation of chitosan increased the antioxidant activity of the BC paper. Paper-based BC-Ch nanocomposites combined the physical properties of BC paper and the antimicrobial, antibiofilm, and antioxidant activities of chitosan
CitationCabañas, L. [et al.]. Bacterial cellulose-chitosan paper with antimicrobial and antioxidant activities. "Biomacromolecules", 12 Març 2020, vol. 21, núm. 4, p. 1568-1577.
URIhttp://hdl.handle.net/2117/192930
DOI10.1021/acs.biomac.0c00127
ISSN1525-7797
Publisher versionhttps://pubs.acs.org/doi/10.1021/acs.biomac.0c00127
Collections
Share: