The ship-generated waste and cargo residues 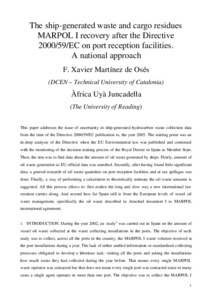 Document typePart of book or chapter of book
PublisherF. Xavier Martínez de Osés
Rights accessOpen Access
Abstract
This paper addresses the issue of uncertainty in ship-generated hydrocarbon waste collection data from the time of the Directive 2000/59/EC publication to, the year 2005. The starting point was an in-deep analysis of the Directive when the EU Environmental law was published and continued with the monitoring of the decision making process of the Royal Decree in Spain as Member State. Then, the aim was to find data about the amount of oil waste generated by ships. Firstly, amount of oil waste generation as EU official data was searched. Secondly, after having found little significant data, a general research of oil waste quantities on port reception facilities and at sea spillages was done. Finally, a way of performing a calculation to theoretically estimate the oil waste amounts is suggested. All this process allows to: first realize the long and slow way a new international law creation carries along. And second how far Spain still is from the European levels of vessel oil waste management, specifically the oil waste described in Attached document I to MARPOL international agreement.
CitationProceedings of 5th ICMTIR. 2007
Is part of5th ICMTIR
URIhttp://hdl.handle.net/2117/1929
Other identifiersB-49177 - 2007
Collections
Share: