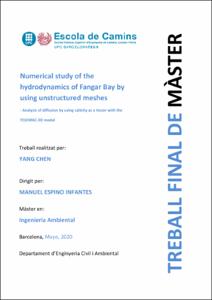 Document typeMaster thesis
Rights accessOpen Access
Abstract
This master thesis work used the integrated modeling tool Telemac, based on the finite element method and unstructured grid, constructed hydrodynamics model of Fangar Bay, making use of existing bathymetry, climate and other data sources during the period of Fangar-III campaign. Under the driving force of micro-tide and local wind, the result of the hydrodynamic numerical model effectively presented that the regular changes in the water surface of the bay and the difference of water currents between the bay mouth and the inner bay, as well as the difference of currents between bottom and surface. Summarized the effects of natural tidal cycles and local winds on the water exchange in the bay and the positive effects of the estuary circulation on Fangar Bay. In particular, the numerical model validated the distribution of salinity in the bay by using salinity as a tracer of freshwater discharge. Mainly discuss variable flowrates freshwater contribution from two main agricultural channel sources, and the special salinity plume caused by the difference in salinity between freshwater and seawater. Summarized that these plumes containing contaminates caused the formation of low-salinity areas at top of the bay and indirectly affected the salinity and water quality of the Gulf Ampolla and eastern offshore coast of sandbar. It emphasizes the importance of controlling the flowrates of freshwater and the dependence on local winds for the Fangar Bay.
SubjectsHydrodynamics, Coasts, Hidrodinàmica, Costes
DegreeMÀSTER UNIVERSITARI EN ENGINYERIA AMBIENTAL (Pla 2014)
URIhttp://hdl.handle.net/2117/192874
Collections
Share: