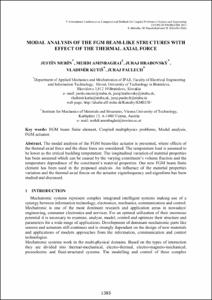 Show full item record
Murín, Justín
Aminbaghai, Mehdi
Hrabovsky, Juraj
Kutis, Vladimir
Paulech, Juraj
Document typeConference report
PublisherCIMNE
Rights accessOpen Access
Abstract
The modal analysis of the FGM beam-like actuator is presented, where effects of the thermal axial force and the shear force are considered. The temperature load is assumed to be lower as the critical buckling temperature. The longitudinal variation of material properties has been assumed which can be caused by the varying constituent’s volume fraction and the temperature dependence of the constituent’s material properties. Our new FGM beam finite element has been used in the proposed analysis. An influence of the material properties variation and the thermal axial forces on the actuator eigenfrequency and eigenform has been studied and discussed.
URIhttp://hdl.handle.net/2117/192855
ISBN978-84-941407-6-1
Collections
Share: