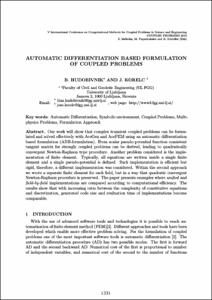 Show full item record
Hudobivnik, B.
Korelc, J.
Document typeConference report
PublisherCIMNE
Rights accessOpen Access
Abstract
Our work will show that complex transient coupled problems can be formulated and solved effectively with AceGen and AceFEM using an automatic differentiation based formulation (ADB-formulation). From scalar pseudo-potential function consistent tangent matrix for strongly coupled problems can be derived, leading to quadratically convergent Newton-Raphson type procedure. Another problem considered is the implementation of finite element. Typically, all equations are written inside a single finite element and a single pseudo-potential is defined. Such implementation is efficient but rigid, therefore, a different implementation was considered. Within the second approach we wrote a separate finite element for each field, but in a way that quadratic convergent Newton-Raphson procedure is preserved. The paper presents examples where unified and field-by-field implementations are compared according to computational efficiency. The results show that with increasing ratio between the complexity of constitutive equations and discretization, generated code size and evaluation time of implementations become comparable.
URIhttp://hdl.handle.net/2117/192850
ISBN978-84-941407-6-1
Collections
Share: