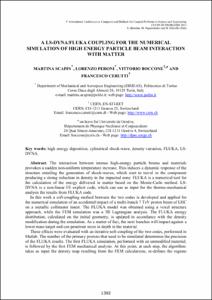 Show full item record
Scapin, Martina
Peroni, Lorenzo
Boccone, Vittorio
Cerutti, Francesco
Document typeConference report
PublisherCIMNE
Rights accessOpen Access
Abstract
The interaction between intense high-energy particle beams and materials provokes a sudden non-uniform temperature increase. This induces a dynamic response of the structure entailing the generation of shock-waves, which start to travel in the component producing a strong reduction in density in the impacted zone. FLUKA is a numerical tool for the calculation of the energy delivered in matter based on the Monte-Carlo method. LSDYNA is a non-linear FE explicit code, which can use as input for the thermo-mechanical analysis the results from FLUKA code. In this work a soft-coupling method between the two codes is developed and applied for the numerical simulation of an accidental impact of a multi-bunch 7 TeV proton beam of LHC on a metallic collimator insert. The FLUKA model was obtained using a voxel structure approach, while the FEM simulation was a 3D Lagrangian analysis. The FLUKA energy distribution, calculated on the initial geometry, is updated in accordance with the density modification during the simulation. As a matter of fact, the next bunches will impact against a lower mass target and can penetrate more in depth in the material. These effects were evaluated with an iterative soft-coupling of the two codes, performed in Matlab. The number of the primary protons that need to be simulated determines the precision of the FLUKA results. The first FLUKA simulation, performed with an unmodified material, is followed by the first FEM mechanical analysis. At this point, at each step, the algorithm: takes as input the density map resulting from the FEM calculations, re-defines the regions with different density in the target material, using the voxel structure and then runs a new FLUKA calculation which will be used as input for the next step FEM analysis (and so on). The first results confirm that the density reduction in the maximum deposition area provokes a reduction in the particle beam/matter interaction with a reduction of deposited energy and a sort of tunnelling effect. In more details, the peak of the energy deposition moves into the component along the direction of the beam. The comparison with the uncoupled case shows that also the pressure is affected: the maximum value decreases since the shockwave penetrates more into the material. The results also show that to be able to appreciate the difference between coupled and uncoupled analysis, it is necessary to obtain a quite significant density reduction: this occurs when the shockwaves has the time to travel radially away from the hit zone producing a significant rarefaction.
URIhttp://hdl.handle.net/2117/192847
ISBN978-84-941407-6-1
Collections
Share: