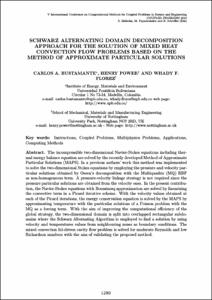 Show full item record
Bustamante, Carlos A.
Power, Henry
Florez, Whady F.
Document typeConference report
PublisherCIMNE
Rights accessOpen Access
Abstract
The incompressible two-dimensional Navier-Stokes equations including thermal energy balance equation are solved by the recently developed Method of Approximate Particular Solutions (MAPS). In a previous authors’ work this method was implemented to solve the two-dimensional Stokes equations by employing the pressure and velocity particular solutions obtained by Oseen’s decomposition with the Multiquadric (MQ) RBF as non-homogeneous term. A pressure-velocity linkage strategy is not required since the pressure particular solutions are obtained from the velocity ones. In the present contribution, the Navier-Stokes equations with Boussinesq approximation are solved by linearizing the convective term in a Picard iterative scheme. With the velocity values obtained at each of the Picard iterations, the energy conservation equation is solved by the MAPS by approximating temperature with the particular solutions of a Poisson problem with the MQ as a forcing term. With the aim of improving the computational efficiency of the global strategy, the two-dimensional domain is split into overlapped rectangular subdomains where the Schwarz Alternating Algorithm is employed to find a solution by using velocity and temperatures values from neighbouring zones as boundary conditions. The mixed convection lid-driven cavity flow problem is solved for moderate Reynolds and low Richardson numbers with the aim of validating the proposed method.
URIhttp://hdl.handle.net/2117/192845
ISBN978-84-941407-6-1
Collections
Share: