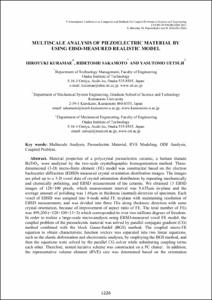 Show full item record
Kuramae, Hiroyuki
Sakamoto, Hidetoshi
Uetsuji, Yasumoto
Document typeConference report
PublisherCIMNE
Rights accessOpen Access
Abstract
Material properties of a polycrystal piezoelectric ceramic, a barium titanate BaTiO3, were analyzed by the two-scale crystallographic homogenization method. Threedimensional (3-D) micro-finite element (FE) model was constructed based on the electron backscatter diffraction (EBSD) measured crystal orientation distribution images. The images are piled up to a 3-D voxel data of crystal orientation distribution by repeating mechanically and chemically polishing, and EBSD measurement of the ceramic. We obtained 13 EBSD images of 128×100 pixels, which measurement interval was 0.635μm in-plane and the average amount of polishing was 1.66μm in thickness (normal) direction of specimen. Each voxel of EBSD was assigned into 8-node solid FE in-plane with maintaining resolution of EBSD measurement, and was divided into three FEs along thickness direction with same crystal orientation, because of improvement of aspect ratio of FE. The total number of FEs was 499,200 (=128×100×13×3) which corresponded to over two millions degrees of freedom. In order to realize a large-scale micro-analysis using EBSD-measured voxel FE model, the coupled problem of the piezoelectric material was solved by parallel conjugate gradient (CG) method combined with the block Gauss-Seidel (BGS) method. The coupled micro-FE equation to obtain characteristic function vectors was separated into two linear equations, such as the elastic deformation and electrostatic analyses, by employing the BGS method, and then the equations were solved by the parallel CG solver while substituting coupling terms each other. Therefore, nested iterative scheme was constructed on a PC cluster. In addition, the representative volume element (RVE) size was determined based on the orientation distribution function analyses of EBSD voxel data. The least RVE size was 25,000μm3, which corresponded to include 150 crystal grains.
URIhttp://hdl.handle.net/2117/192840
ISBN978-84-941407-6-1
Collections
Share: