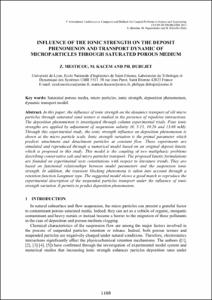 Show full item record
Mesticou, Z.
Kacem, M.
Dubujet, PH.
Document typeConference report
PublisherCIMNE
Rights accessOpen Access
Abstract
In this paper, the influence of ionic strength on the dynamics transport of silt micro particles through saturated sand texture is studied in the presence of repulsive interactions. The deposition phenomenon is investigated through column experimental trials. Four ionic strengths are applied by adjustment of suspension salinity (0, 5.13, 10.26 and 13.68 mM). Through this experimental study, the ionic strength influence on deposition phenomenon is shown at the micro particle scale. Ionic strength variation is the primal parameter which predicts attachment and detachment particles at constant flow. These experiments are simulated and reproduced through a numerical model based on an original deposit kinetic which is proposed in this study. This model is the coupling of two multiphasic problems describing conservative salt and micro particles transport. The proposed kinetic formulations are founded on experimental tests constitutions with respect to literature trends. They are based on functional relationships between model parameters and the suspension ionic strength. In addition, the transient blocking phenomena is taken into account through a retention function Langmuir type. The suggested model shows a good match to reproduce the experimental description of the suspended particles transport under the influence of ionic strength variation. It permits to predict deposition phenomenon.
URIhttp://hdl.handle.net/2117/192762
ISBN978-84-941407-6-1
Collections
Share: