Coupled swelling and large strain model for hydrogels: application to the nucleus pulposus of the intervertebral disc 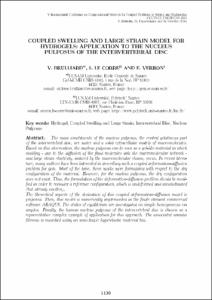 Show full item record
Brulliard, V.
Le Corre, S.
Verron, E.
Document typeConference report
PublisherCIMNE
Rights accessOpen Access
Abstract
The main constituents of the nucleus puposus , the centrl gelatinous part of the intervertebral disc, are water and a solid extracellular matrix of macromolecules. Based on this observation, the nucleus pulposus can be seen as a gel-like material in wich swelling - due to the diffusion of the fluid molecules into the macromolecular network - and large strain elasticity, induced by the macromollecular chains, occur. In recent literature, many autors have been interested in describing such a coupled deformation-diffusion problem for gels. Most of the tim, these works where formulated with respect to the dry configuration of the material. Howevver, for the nucleus pulposus, the dru configuration does not exist. Thus, the formulation of the deformation-diffusion problem should be modified in order to consider a reference configuration, wich is undeformed and unconstrained (but already swollen). The theoretical aspects of the derivation of this coupled deformation-diffusion model is proposed. Then, this model is numerically implemented in the finite element commercial software ABAQUS. The state of equilibrium are investigated on simple homogeneous examples. Finally, the himan nucleus pulposus of the intervertebral disc is chosen as a representative complex crample of application for this approach. The associated annulus fibrosus is modelled using an anisotropic hyperelastic material law.
URIhttp://hdl.handle.net/2117/192759
ISBN978-84-941407-6-1
Collections
Share: