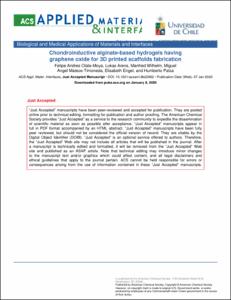 Arens, Lukas
Wilhelm, Manfred
Palza, Humberto
Document typeArticle
Rights accessOpen Access
Abstract
Scaffolds based on bioconjugated hydrogels are attractive for tissue engineering because they can partly mimic human tissue characteristics. For example, they can further increase their bioactivity with cells. However, most of the hydrogels present problems related to their processability, consequently limiting their use in 3D printing to produce tailor-made scaffolds. The goal of this work is to develop bioconjugated hydrogel nanocomposite inks for 3D printed scaffold fabrication through a micro-extrusion process having improved both biocompatibility and processability. The hydrogel is based on a photocrosslinkable alginate bioconjugated with both gelatin and chondroitin sulfate in order to mimic the cartilage extracellular matrix, while the nanofiller is based on graphene oxide to enhance the printability and cell proliferation. Our results show that the incorporation of graphene oxide into the hydrogel inks considerably improved the shape fidelity and resolution of 3D printed scaffolds because of a faster viscosity recovery post extrusion of the ink. Moreover, the nanocomposite inks produce anisotropic threads after the 3D printing process because of the templating of the graphene oxide liquid crystal. The in vitro proliferation assay of human adipose tissue-derived mesenchymal stem cells (hADMSCs) shows that bioconjugated scaffolds present higher cell proliferation than pure alginate, with the nanocomposites presenting the highest values at long times. Live/Dead assay otherwise displays full viability of hADMSCs adhered on the different scaffolds at day 7. Notably, the scaffolds produced with nanocomposite hydrogel inks were able to guide the cell proliferation following the direction of the 3D printed threads. In addition, the bioconjugated alginate hydrogel matrix induced chondrogenic differentiation without exogenous pro-chondrogenesis factors as concluded from immunostaining after 28 days of culture. This high cytocompatibility and chondroinductive effect toward hADMSCs, together with the improved printability and anisotropic structures, makes these nanocomposite hydrogel inks a promising candidate for cartilage tissue engineering based on 3D printing.
CitationOlate, F. [et al.]. Chondroinductive alginate-based hydrogels having graphene oxide for 3D printed scaffold fabrication. "ACS Applied materials and interfaces", 7 Gener 2020, vol. 12, núm. 4, p. 4343-4357.
URIhttp://hdl.handle.net/2117/192745
DOI10.1021/acsami.9b22062
ISSN1944-8252
Publisher versionhttps://pubs.acs.org/doi/10.1021/acsami.9b22062
Collections
Share: