Let the data do the talking: empirical modelling of survey-based expectations by means of genetic programming 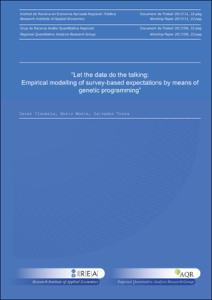 Torra Porras, Salvador
Document typeExternal research report
Rights accessOpen Access
Abstract
In this study we use agents’ expectations about the state of the economy to generate indicators of economic activity in twenty-six European countries grouped in five regions (Western, Eastern, and Southern Europe, and Baltic and Scandinavian countries). We apply a data-driven procedure based on evolutionary computation to transform survey variables in economic growth rates. In a first step, we design five independent experiments to derive the optimal combination of expectations that best replicates the evolution of economic growth in each region by means of genetic programming, limiting the integration schemes to the main mathematical operations. We then rank survey variables according to their performance in tracking economic activity, finding that agents’ “perception about the overall economy compared to last year” is the survey variable with the highest predictive power. In a second step, we assess the out-of-sample forecast accuracy of the evolved indicators. Although we obtain different results across regions, Austria, Slovakia, Portugal, Lithuania and Sweden are the economies of each region that show the best forecast results. We also find evidence that the forecasting performance of the survey-based indicators improves during periods of higher growth.
Description
Working paper
CitationClaveria, O.; Monte, E.; Torra Porras, S. "Let the data do the talking: empirical modelling of survey-based expectations by means of genetic programming". 2017.
URIhttp://hdl.handle.net/2117/192731
URL other repositoryhttp://www.ub.edu/irea/working_papers/2017/201711.pdf
Collections
Share: