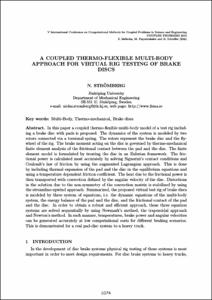 Show full item record
Strömberg, N.
Document typeConference report
PublisherCIMNE
Rights accessOpen Access
Abstract
In this paper a coupled thermo-flexible multi-body model of a test rig including a brake disc with pads is proposed. The dynamics of the system is modeled by two rotors connected via a torsional spring. The rotors represent the brake disc and the flywheel of the rig. The brake moment acting on the disc is governed by thermo-mechanical finite element analysis of the frictional contact between the pad and the disc. The finite element model is formulated by treating the disc in an Eulerian framework. The frictional power is calculated most accurately by solving Signorini’s contact conditions and Coulomb’s law of friction by using the augmented Lagrangian approach. This is done by including thermal expansion of the pad and the disc in the equilibrium equations and using a temperature dependent friction coefficient. The heat due to the frictional power is then transported with convection defined by the angular velocity of the disc. Distortions in the solution due to the non-symmetry of the convection matrix is stabilized by using the streamline-upwind approach. Summarized, the proposed virtual test rig of brake discs is modeled by three system of equations, i.e. the dynamic equations of the multi-body system, the energy balance of the pad and the disc, and the frictional contact of the pad and the disc. In order to obtain a robust and efficient approach, these three equation systems are solved sequentially by using Newmark’s method, the trapezoidal approach and Newton’s method. In such manner, temperatures, brake power and angular velocities can be generated accurately at low computational costs for different braking scenarios. This is demonstrated for a real pad-disc system to a heavy truck.
URIhttp://hdl.handle.net/2117/192690
ISBN978-84-941407-6-1
Collections
Share: