A functional for the momentum equations of incompressible viscous flow 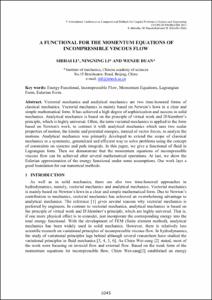 Show full item record
Li, Shihai
Li, Ningning
Duan, Wenjie
Document typeConference report
PublisherCIMNE
Rights accessOpen Access
Abstract
Vectorial mechanics and analytical mechanics are two time-honored forms of classical mechanics. Vectorial mechanics is mainly based on Newton’s l aws i n a c lear a nd simple mathematical form. It has achieved a high degree of sophistication and success in solid mechanics. Analytical mechanics is based on the principle of virtual work and D'Alembert’s principle, which is highly universal. Often, the term vectorial mechanics is applied to the form based on Newton's work, to contrast it with analytical mechanics which uses two scalar properties of motion, the kinetic and potential energies, instead of vector forces, to analyze the motions. Analytical mechanics was primarily developed to extend the scope of classical mechanics in a systematic, generalized and efficient way to solve problems using the concept of constraints on systems and path integrals. In this paper, we give a functional of fluid in Lagrangian form. Then we demonstrate that the momentum equations of incompressible viscous flow can be achieved after several mathematical operations. At last, we show the Eulerian approximation of the energy functional under some assumptions. Our work lays a good foundation for our numerical methods.
URIhttp://hdl.handle.net/2117/192678
ISBN978-84-941407-6-1
Collections
Share: